It's just something about a Godly man.. 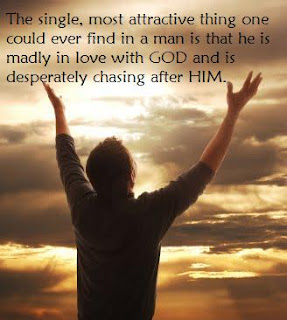 It's just something about a Godly man. A man who speaks with the wisdom of God, who is confident with who he  is in Christ and doesn't have to brag about getting women and money,who's not looking for a fling he's only looking for the one woman who will get the ring,who ignores all the women throwing  themselves at him because his eyes are being kept for his wife only, who's not trying to get rich or die trying but trying to spread the gospel or die trying,who will walk you down the aisle not walk you to his bedroom,who eyes are focused on Christ and not every woman's backside and breast, who's worth isn't found in a fraternity or a degree his worth is found in Christ alone, who's not looking for a Victoria Secret model type but a Proverbs 31 wife, who rather save his money than spend it on weed strippers and liquor ,who rather love and be faithful to one woman for life than be with a different woman every night,who put away childish things and became a man,who doesn't run from trials and adversities he depends on God and prays his way through,who rather keep himself pure for his future wife than have sex with anything walking, who rather pick up a bible than pick up a gun, who doesn't hang with a bunch of guys who's not going anywhere in life but has circle of friends who are accountable and serious about Christ,who's not trying to hang out with the stars,show of his car and trying to buy out the bar, he is set apart, who's not trying to be in the limelight he's only concerned about showing Christ's light, who's not just a church guy he's a man after God's own heart,who's not on instagram lusting off half naked girls because he's not even attracted to those type, who doesn't boast in his skills and abilities he boasts in Christ alone, who will cover you in prayer and won't try to pressure you to get under the covers,who doesn't want to lead women on so he's careful in how he deals with them, who doesn't flirt and chase skirts,who's an example to younger guys and teaches them the things of God, who doesn't brag and put his every move on social networks but he practices discretion,  who's more concerned about his character than his image, who's not caught up in a woman's outward beauty but her inward beauty, who doesn't make excuses for his past he owns up and learns from his mistakes, who guards his heart and is careful about what he listens to and watches,who doesn't call women out their name and degrade them because he has respect for them, who's not trying to be like the rappers he only tries to be like Christ, who doesn't have to flex for other people he is content in where he is.It's just something about a Godly man who will make a Godly woman forget every wrong guy in her past. It's just something about a Godly man who makes it worth the wait. If you have one cherish him because I know I will cherish mine:-) 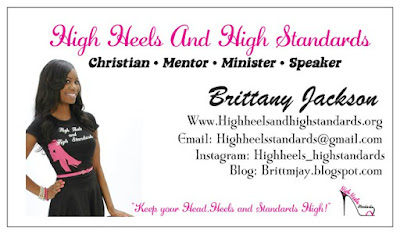 Brittjay
Atlanta, Georgia, United States
Hi guys I'm Brittany Jay, welcome to my blog! I'm the founder of High Heels and High Standards, an evangelical ministry that equips women with biblical truth and encourages them to uphold God's standards. I started this blog in 2012 as an avenue to encourage women with the word of God. Thanks for those who have followed and supported me throughout the years. Continue to follow me as I follow Christ!